Home / About Us / Ambassador Phillips

The Phillips Ambassadors scholarship program was made possible through a generous gift to UNC's College of Arts & Sciences and UNC Kenan-Flagler Business School from alumnus Earl N. "Phil" Phillips Jr., a businessman and former U.S. Ambassador to the Eastern Caribbean. Ambassador Phillips earned a bachelor's degree in business administration from Carolina in 1962, and he was a member of the UNC Board of Trustees from 1983 to 1991. Ambassador Phillips chaired the board from 1989 to 1991. In 1995, he received a William R. Davie Award, the highest honor bestowed by the board recognizing extraordinary service to the University or society.

Ambassador Phillips' gift to establish the Phillips Ambassadors scholarship program is not his first contribution to international studies at Carolina. In 1992, he established the Earl N. Phillips Jr. Professorship in International Studies to help attract outstanding faculty. He was International Executive in Residence at Kenan-Flagler Business School in 2003-2004, and received the school's Global Leadership Award in 2001.

In 1999 and 2000, Phillips chaired the N.C. Citizens for Business and Industry and co-chaired North Carolinians for Educational Opportunity 2000. The latter organization spearheaded the successful $3.2 billion bond referendum for capital improvements at UNC campuses and the state's community colleges. He served for 16 years on the UNC Endowment Board and for four years on the UNC Board of Governors, which oversees all 17 system campuses.

"International travel is one of life's great educational experiences," Phillips said, in launching the Phillips Ambassadors. He credits his parents with giving him that opportunity – they traveled the globe when he was a teenager. "That opened my eyes to the world, and I have been traveling and exploring ever since," he said. "I want Carolina undergraduates to experience that same thing."

His entire family has embraced his international interests. Daughter, Courtney Phillips Hyder, studied abroad in London and on the Semester at Sea program as a Carolina undergraduate; son, Jordan Phillips, studied abroad in Spain and worked for a private equity firm in Hong Kong. The two graduated from UNC in 1996 and 2004, respectively. 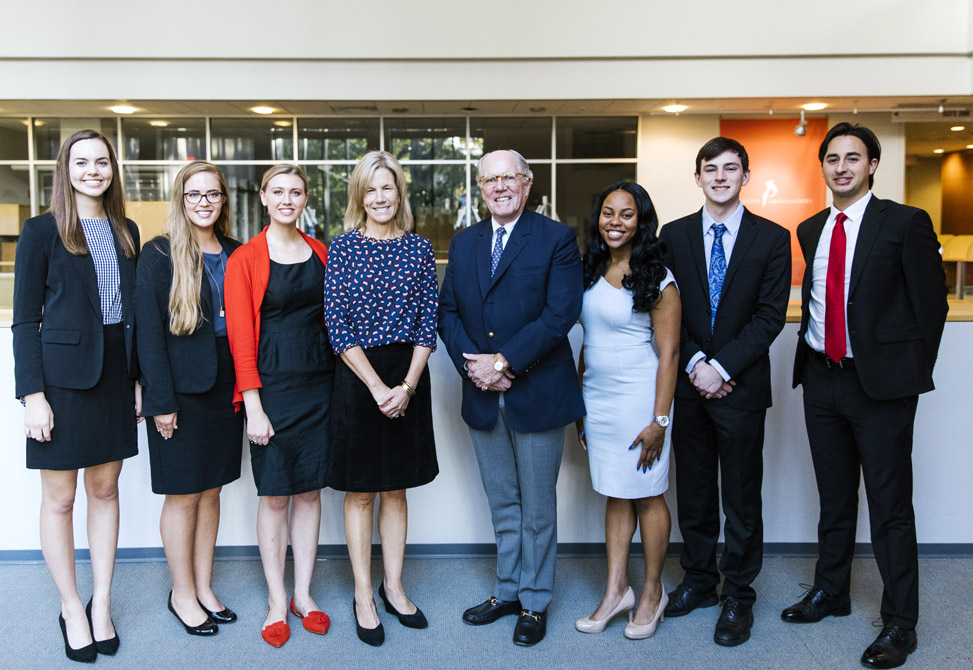 Ambassador and Mrs. Phillips welcome the Spring 2019 ambassadors at a dinner on October 30, 2018 in Chapel Hill.