Home / About Us / Advisory Board 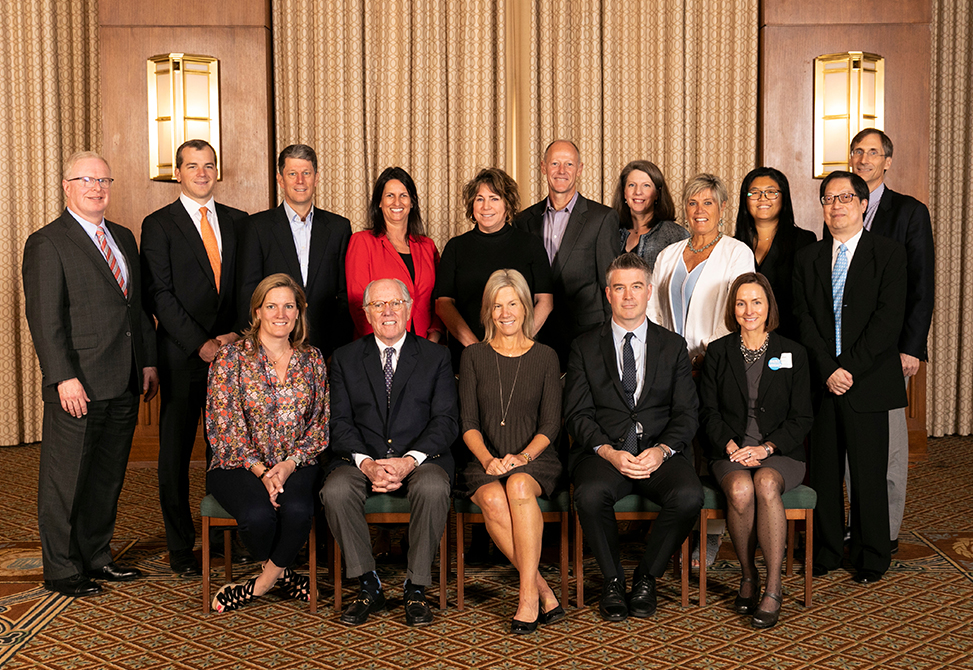 Phil Phillips is president and chief executive officer of World Link, headquartered in High Point. He served as Ambassador of the United States to Barbados and the Eastern Caribbean in 2002 and 2003.

Born in High Point, Phil is a graduate of Woodberry Forest School in Orange, Virginia, the University of North Carolina at Chapel Hill and Harvard Business School. In 1972, he co-founded and was president and chief executive officer of First Factors Corporation, a financial services company, which was acquired by GE Capital in 1998. He also was a partner in Showplace, Hamilton Properties, and Phillips Interests, all real estate development and management companies specializing in home furnishing showrooms and offices.

Kim Phillips co-founded the Phillips Ambassadors Program in 2007. Her interest in student engagement has shaped her career commitment to help build collaborative learning experiences and innovative curriculum initiatives at both secondary schools and institutions of higher learning. A graduate of Duke University, where she received her B.A., M.A. and was a Ph.D. candidate in History, she has worked for the last fifteen years with The University of North Carolina, Chapel Hill, on campus internationalization efforts. Kim has focused primarily on undergraduate opportunities abroad, specifically addressing issues of access and affordability, experiential learning and strategic global program expansion. As co-founder of the Phillips Ambassadors Program, she has had the opportunity and privilege to work closely with university administration, faculty and students across campus. Additionally, Kim has enjoyed serving on a variety of advisory boards including the UNC Board of Visitors, Playmakers Repertory Company, UNC Press, The Ronald McDonald House, Kidzu Museum and Full Frame Film Festival.

Wyatt Bruton is the Associate Director of Global Admissions, where he helps lead the strategy and execution of a highly competitive selection process designed to recruit and select next-generation leaders who will serve to deepen understanding between China and the rest of the world. Prior to joining Schwarzman Scholars, Wyatt served as Associate Director of Admissions at NYU Shanghai, where he oversaw marketing, recruitment, evaluation and selection for the first Sino-American university. He also helped lead the inaugural admissions team at Duke Kunshan University and served as a Teach For China fellow. Wyatt was one of the first Phillips Ambassadors (China ‘09) who went on to earn his BA from the University of North Carolina at Chapel Hill and his MA from New York University.

Rudi Colloredo-Mansfeld is the Senior Associate Dean for Social Sciences and Global Programs in the College of Arts and Sciences. He oversees the departments/curricula and other units in the social sciences: Aerospace Studies; African, African American and Diaspora Studies; Anthropology; Archaeology and the Research Labs in Archaeology; Asian Studies; City and Regional Planning; Economics; Geography; History; Military Science; Naval Science; Peace, War and Defense; Political Science; Public Policy; Sociology; and the Center for Urban and Regional Studies. He also oversees all the global programs of the College that are housed together in the FedEx Global Education Center, including the Office of Study Abroad, African Studies Center, Carolina Asia Center, Center for the Study of the Middle East and Muslim Civilizations, the Center for European Studies, Curriculum in Global Studies, Institute for the Study of the Americas and the Center for Slavic, Eurasian and East European Studies. Rudi served as Chair of the Department of Anthropology from 2013 to 2017.

Rudi has been at Carolina since 2008, coming from the University of Iowa. He received his M.A. and Ph.D. in anthropology from UCLA in 1992 and 1996, respectively, and his B.A. in anthropology and European history from UNC in 1987 where he was a Morehead Scholar and graduated Phi Beta Kappa. He also previously served as Chair of the Council of Chairs and on the Food For All Campus Theme Steering Committee. He serves on the Student-Athlete Academic Process Review Group, and he served on the 2012-13 Task Force to Facilitate Research on Pedagogical Innovation at Carolina.

Rudi’s scholarly research and teaching focuses on Indigenous peoples, consumer cultures and local food systems. Much of his work has concerned indigenous peoples in the Ecuadorian highlands. He recently began collaborating with colleagues at the Universidad San Francisco de Quito, or USFQ, Carolina’s partner in the Galapagos Science Center, comparing models of community tourism in conservation areas in the Galapagos and the Andes. Since 2004, Rudi has worked on local food issues in the United States, focusing on efforts to integrate local food into regional food systems.

Wendell Gilland is an award-winning teacher of operations management and such special topics as supply-chain management, response-time management and models used to guide operations decision making. His research focuses on the performance improvement gained by using multiple customer priorities, products designed for multiple markets, and multiple channels of distribution.

Wendell brings valuable industry experience to his academic career. He worked at Monitor Company, the consulting company founded by Michael Porter to apply his business strategy frameworks to the strategic planning process of Fortune 500 clients. He also worked at CSC Index, the consulting firm led by Jim Champy and Michael Hammer that pioneered business process reengineering. Through his experience with these firms and subsequent independent consulting projects, he has worked in a variety of industries and companies, including Apple Computer, Eastman Chemicals, Intel, Caterpillar, Hoechst-Celanese, Matsushita, Nationwide Insurance, Sony, State Street Bank and Tektronix. Wendell received his PhD and MBA from Stanford University and his AB from Harvard University.

Courtney Phillips Hyder graduated from the University of North Carolina at Chapel Hill with a political science degree in 1996. She resides in Charlotte, with her spouse and three children. As an undergraduate, Courtney studied abroad in London and on the Semester at Sea program. She served on the UNC Board of Visitors from 2004 -2008, and currently is a member of the Carolina Women’s Leadership Council, a nationwide network of women committed to supporting the University and students’ educational experiences.

Jordan Phillips is a founding partner of South Street Partners, a Charlotte and Charleston based real estate investment, management and development company focused on opportunistic and value added real estate investments throughout the United States. Prior to founding South Street Partners, Jordan was an analyst with Discovery Land Company, a high-end master planned community developer focused on second home properties all over North America. Prior to joining Discovery, he spent two years in Hong Kong as an analyst with Inter-Asia Venture Management, Asia’s oldest VC fund. Inter-Asia focused on providing seed capital for companies in China, Hong Kong, India, Vietnam, Thailand and Indonesia. Jordan graduated from the University of North Carolina at Chapel Hill with a BA in economics and a minor in Spanish.

Terry Rhodes has been dean of the College of Arts & Sciences since March 2020, previously serving as interim dean for a year. Rhodes has long championed the value of the arts and humanities to a well-rounded education throughout her more than three decades at Carolina. She was senior associate dean for fine arts and humanities from 2012 to 2019. She is the first faculty member from the fine arts to be named dean of the College since it took its modern-day name in 1935. As dean, Rhodes oversees the largest academic unit at Carolina, with over 17,000 undergraduate students and 2,400 graduate students, and more than 70 academic departments, curricula, programs, centers and institutes. Initiatives that she has introduced as dean include:
• Reckoning: Race, Memory and Reimagining the Public University, a shared learning experience that supported student inquiry and dialogue on issues of heritage, race, post-conflict legacies, politics of remembrance and contemporary projects of reconciliation. In Fall 2020, its successor, Student Learning to Advance Truth and Equity, or SLATE, was launched and will continue in Fall 2021.
• Countering Hate: Overcoming Fear of Differences, a collection of programming and courses that enabled the university community to explore the phenomena of antisemitism, Islamophobia and other forms of intolerance and prejudice.
• Southern Futures, an initiative designed to make Carolina the place to which the nation and world turn to understand and imagine the South’s future.

Rhodes also oversaw the launch of the College’s new Program for Public Discourse. Its purpose is to build students’ capacity for civil debate, dialogue, discussion and conversation. She is principal investigator of the Humanities for the Public Good initiative from the Mellon Foundation.

Rhodes, a native of Raleigh, graduated Phi Beta Kappa from Carolina in 1978 (Bachelor of Music) and is a proud Carolina parent. She joined the faculty in 1987 and has since served the University in a variety of roles, including director of UNC Opera and chair of the Department of Music.
She earned both her Master of Music and her Doctor of Musical Arts from the Eastman School of Music at the University of Rochester in New York. As a Fulbright artist-in-residence at the Conservatory of Music in Macedonia, she taught voice and performed throughout the Balkans and Eastern Europe. She continues to teach and give concerts.

Heather H. Ward is the associate provost for global affairs. Ward helps manage the Office of the Vice Provost for Global Affairs as well as spearheads key initiatives. As lead for 7.2 of Carolina Next — “Guarantee that a global education is available to all students” by offering “all Carolina students the best menu of global opportunities possible under challenging and changing times” — she plays an instrumental role in delivering the Global Guarantee, Carolina’s promise to provide all students access to a global education.

In her previous role leading the Study Abroad Office (SAO), Ward was responsible for a dynamic portfolio of 360 study abroad programs and exchanges in 70 countries. In 2018-19, an estimated 43% of students studied abroad before graduation, making Carolina one of the top-20 U.S. institutions for study abroad participation each year. Under Ward’s leadership, the SAO has increased study abroad scholarship funding and introduced new programs to fit the changing needs of UNC-Chapel Hill’s diverse students. Ward was also responsible for the SAO’s professional staff, budget and operations.

Prior to joining UNC-Chapel Hill in January 2019, Ward served as associate director for internationalization and global engagement at the American Council on Education (ACE) in Washington, D.C., where she developed programs and resources to support the internationalization of colleges and universities, as well as increased collaboration among global higher education institutions and systems. Ward also led ACE’s efforts to promote the use of technology to deliver global learning and strengthen international partnerships. Ward previously served as associate director for internationalization and outreach at George Mason University (VA) and Director of International Programs at Mary Baldwin University (VA). Her previous experience in international affairs focused on human rights, criminal justice reform and immigration, and she has held positions with the Vera Institute of Justice, U.S. Department of Justice, Americas Society and U.S. Senate Foreign Relations Committee. Ward holds a bachelor’s degree in Latin American studies and Spanish from Vanderbilt University and a master’s degree in international affairs from Columbia University. Her passion for global education began with an undergraduate semester in Madrid, Spain, followed by a summer internship and field studies in Guatemala.

Caldwell Zimmerman is a Vice President with Kian Capital Partners in Atlanta. Kian Capital is a private investment firm focused on making equity and debt investments in companies in the lower middle market. He began his career in New York City where he was an investment professional at Arsenal Capital Partners and later Harvest Partners. He received his undergraduate degree from the University of North Carolina where he majored in Business Administration. Caldwell serves as the alumni member on the Phillips Ambassadors Advisory Board, having been a recipient of the scholarship when he studied abroad in Hong Kong in 2009.